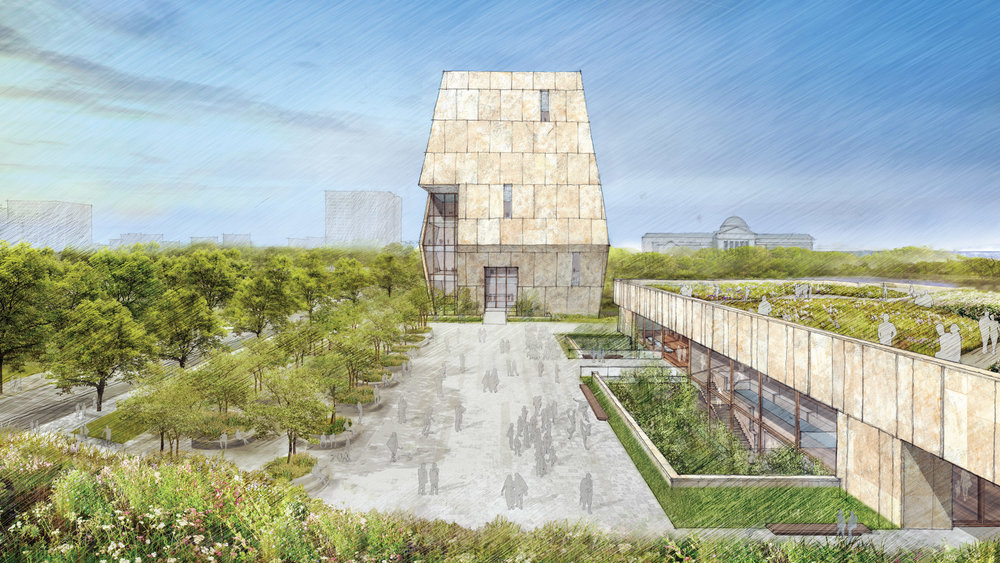 The Obama Presidential Center is the 14th presidential library administered by the Office of Presidential Libraries, with oversight from the National Archives and Records Administration (NARA).  The Center – which includes a library, museum, rooftop garden, community plaza, and speaking forum – has the chance to serve its community in ways that are distinct from past Libraries, just as President Obama himself is unique among his predecessors.

Returning to the city that shaped both the former President and First Lady Michelle Obama, the Presidential Library finds its home in the Jackson Park neighborhood on Chicago’s South Side.  The selection of Jackson Park as the location for this historic monument has received both praise and critique from Jackson Park residents, Chicago neighborhood associations, and the media.

In May of this year, President Obama unveiled the official plans for the Center – estimated at $500 million – at an event at the South Shore Community Center.    “If you ask a lot of people outside of Chicago, about Chicago, what’s the first thing they talk about?  They talk about the violence,” he told the crowd.  “Jackson Park feels different than Lincoln Park or Millennium Park,” he continued.  “It’s not as good as it could be.”  The former President went on to describe how the Center would act as a place for the people and, more importantly, a place designed to bring a positive focus to a city that in recent years has been synonymous with violence.

The New York based firm Tod Williams Billie Tsien Architects, alongside Chicago firm Interactive Design Architects, have been tapped to jointly complete the ambitious plan.  In total, the Center includes three buildings, including a museum, library, and forum.  What makes this Presidential Library stand out from any other is not the Library itself, but President Obama’s vision for building a space that embodies culture, people, community and landscape.  In just a few short years, Jackson Park will be home to new community workspaces, curated rooftop green spaces, and restaurants – integrated into the Jackson Park that once hosted the World’s Columbian Exposition, originally designed by landscape architect Frederick Law Olmsted in 1893.

a space for change

Despite all the factors, what about these plans guarantees that this space is truly any different than libraries of the past? In a recent story by Business Insider, the Obama Foundation told the Chicago Tribune that the Presidential Library will be “a working center for civic engagement and a place to inspire people and communities to create change.”  According to Matthew Messner of The Architects Newspaper, the architects involved in the project echoed this sentiment at the design unveiling: “The design approach for the center is guided by the goal of creating a true community asset that seeks to inspire and empower the public to take on the greatest challenges of our time.”

If you’re looking for more information, look no further than the Library’s official online website which offers visitors a vast collection of photos, video, and archival resources you’ll eventually see in person.  Much of what the site has to offer echoes the historic importance of President Obama’s legacy, inviting visitors to reflect on his impact.  On the homepage, visitors are greeted by a familiar, Obama-era call to action:  “As long as I live, I will never forget that in no other country on earth is my story even possible … But it is a story that has seared into my genetic makeup the idea that this nation is more than the sum of its parts – that out of many we are truly one.”

The Obama Presidential Library may usher in a new era of change in how we think about and use public and Presidential libraries and spaces, but 2021 is still a few years away.  Let’s hope the architects, designers, community organizers, and the Obama Foundation use this time to usher in new ways of thinking and interacting with one another, engaging with collective spaces and resources, creating change long before the library doors are open to the public.